What Is The Difference Between IELTS (General) & IELTS (Academic)

Hence, the one who like to show their skills in all four modules which categorized as the reading, writing, speaking and listening. 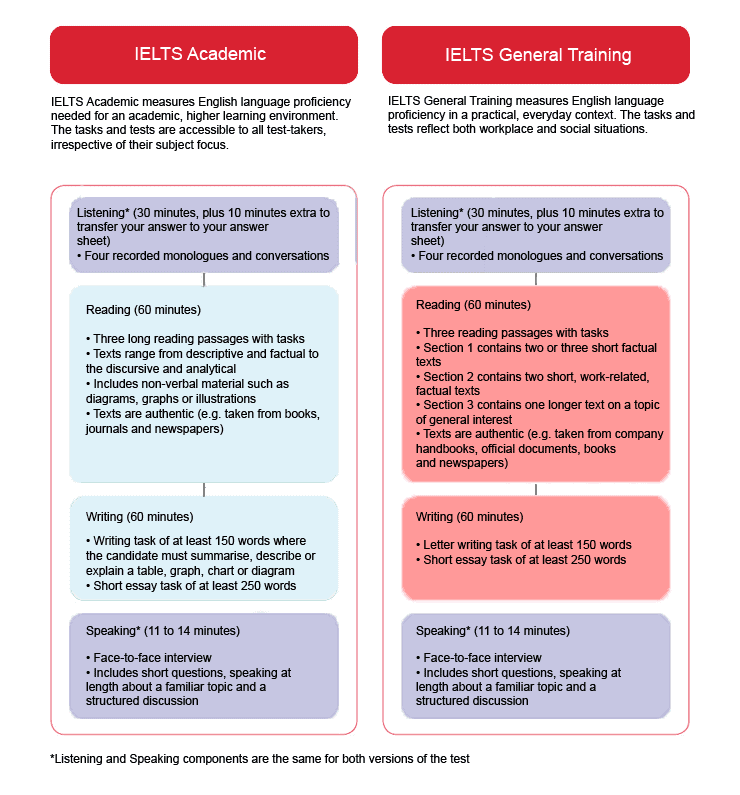 Writing and Reading assessment in IELTS are categorized as the different academic and general trainings assessments. For example, the IELTS Academic assessments based on the topics which are suitable for anyone who are taking admission in foreign universities or professional institutions.

Though, the IELTS Academics has been the aspiration who are willing to peruse their education and professional degree in higher education from foreign universities. Hence, different MNC’s sometime accepted the general assessment of IELTS in order to check the fluency of candidate on English language therefore the assessment conducted and candidate use their score report by getting the job done.

The both versions of the assessments have the same pattern of general format including the writing, reading, listening and speaking skills which will be tested independently no matter which version accepted by the candidate. Though, there is no any difference between the listening and speaking of their sections at all.

General Training IELTS from Pakistan for Immigration to Canada, Australia, and New Zealand

It could be expected on the IELTS academic or the general assessment. In both formats the same is true of the rest two sections where both the versions will involve the two writing tasks where both the reading version will be based on the forty questions in response to the assigned readings.

Therefore, the major difference has begun to appear however, naturally the content and their types will further move on to now.  University students and professionals must have been equipped with the English reading skills which require to be string enough for making the content in professional and academic journals, textbooks and relevant magazines and newspapers.  Academic IELTS has been used by the text directly from the such kinds of the sources to check the comprehension skills. Similarly, the writing task could be specified to the content by using the sample topic that would be relevant in academic and professional settings. Though the English writing skills would be comprehending by making sure the string enough to write the essays of low standards.

General training and IELTS has been taking care and encounter the kind of the language which would be appear in making the advertisement, guidebooks and magazines which support the encounter of the manuals of employees.

Previous Article: How to Get Australian Immigration from Pakistan?
Next Article Study In Australia: Benefits & Future Prospects Leading To Immigration